CCE Prague, spol. s.r.o. participates in the construction of the “Troja” Bridge in Prague, which is part of the City Inner Ring Road.

1. Information about the Construction

Construction of the new “Troja” Bridge between “Holešovice” and “Troja” is a part of the City Ring Road in section “Špejchar – Pelc-Tyrolka”. It is an arched bridge with lower deck, whose length is approximately 250 m and arch height is about 34 m above the river. Span of the main bridge arch is 196 m. The bridge is designed with 2 x 2 lanes with railway for trams in the middle and double sidewalks for pedestrians and cyclists on both sides. 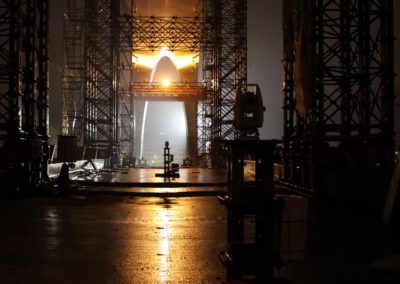 CCE Prague, spol. s r.o. participates in the construction of the bridge since the preparatory stages prior to the beginning of construction and serves as the chief geodetic surveyor for the construction. The individual parts of the bridge were produced in workshops of Metrostav MCE Slaný. Geometrical characteristics of each prefabricated part were checked in the factory. The shape and dimensions of prefabricated cross-beams were checked during their production at SMP company. as well.

The setting-out basic geodetic network was designed in order to satisfy the high requirements on accuracy in pre-assembly and assembly of individual components of the bridge. The survey stations of the network are represented by three 20 m high concrete pillars with forced centering for surveying instruments. The basic network has been completed by another 10 survey stations of the detailed setting-out network for all subsequent geodetic surveying work in both pre-assembly of individual parts of the bridge, as well as during subsequent ejection of the bridge construction.

Our Company has developed an automated measurement system for control of ejection and monitoring of the bridge components deformations.

A new method with wireless inclinometers was used for verticality monitoring of “Troja” Bridge torsion bars, which served for lifting individual bridge arch components. The inclinometers measure the deviations from the vertical in 3 planes and the measured data are continuously transmitted via WiFi to the central office for processing and calculation of rectification of bars position. The system is further completed by sensors measuringr temperature, wind speed and humidity. 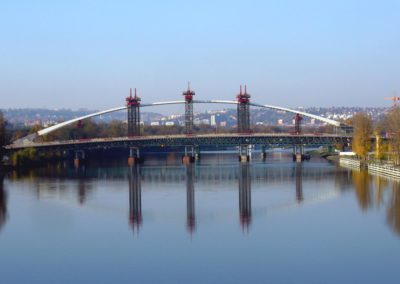 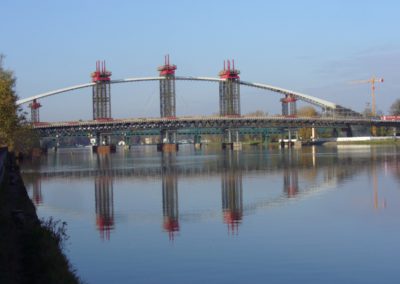